What is a lake tsunami and how do we know about them?

The word ‘tsunami’ is one we don’t often associate with inland bodies of water.

Earthquake generated tsunami are more likely to pose a risk when the epicentre is beneath a body of water. This means that coastal areas might be affected, or perhaps towns nearby to a lake with an active fault lying beneath it. As a result, it is unlikely that the Mackenzie Lakes will be directly affected by an earthquake on the Alpine Fault, but doesn’t rule out the possibility of such an event in places like Queenstown or Wānaka.

Here in the Mackenzie District, the lakes are more likely to be affected by a secondary hazard resulting from the earthquake – landslides.

The prospect of a tsunami occurring on an inland lake might seem unusual. But it’s certainly not unknown. One of the most famous examples of such an event occurred in Italy in the 1960’s. A massive amount of land slid down into the Vajont Dam, just north of Venice, creating an enormous wave that washed downstream of the dam destroying villages and killing thousands. The dam itself was undamaged.

Before (left) and After (right) – In 1963 a huge landslide plunged into the Vajont Dam reservoir lake in Italy. It caused a displacement of water, triggering a 200m high tsunami that overtopped the dam, flooding and devastating the villages down stream (Source: Wikimedia).

So, even though we can take some reassurance from the engineering solutions that have been incorporated in to the construction of the dams, we still need to think about the surrounding landscape, and how resilient it would likely be to the shaking of an earthquake.

Landslides occurring around lakes can either be terrestrial or sub-aqueous in origin – the material can either slide down a steep or loose slope nearby to the lake and fall into the lake, or perhaps the lake bed itself might give way. Then, there is the possibility of a river delta collapsing, causing similar disruption to the body of water. Shaking of the lake bed itself might also cause the water in the lake to slosh around – an affect called ‘seiching’. 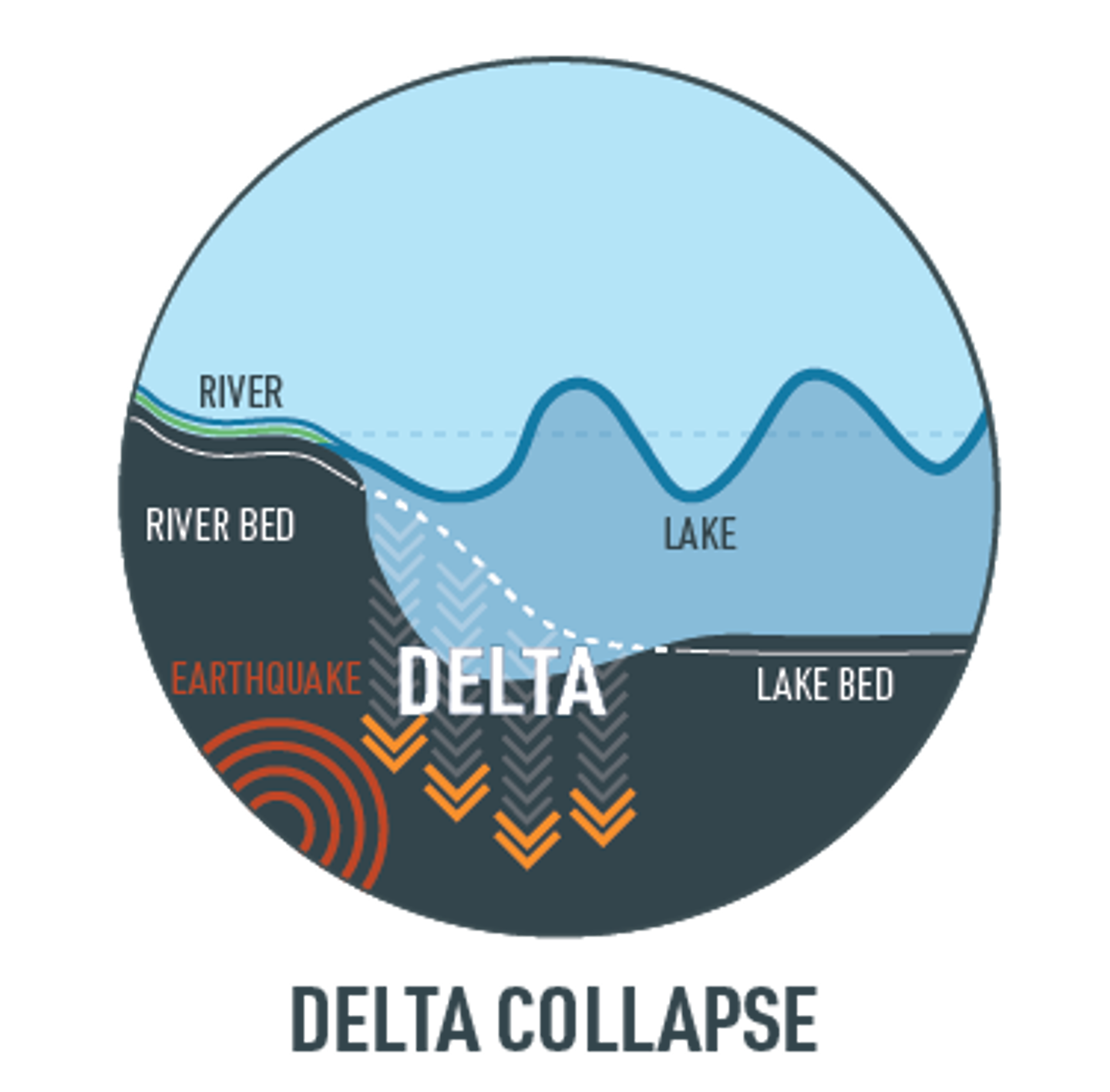 The sediment deposited at the mouth of a river collapses into the lake, displacing the water to create a seiche wave. 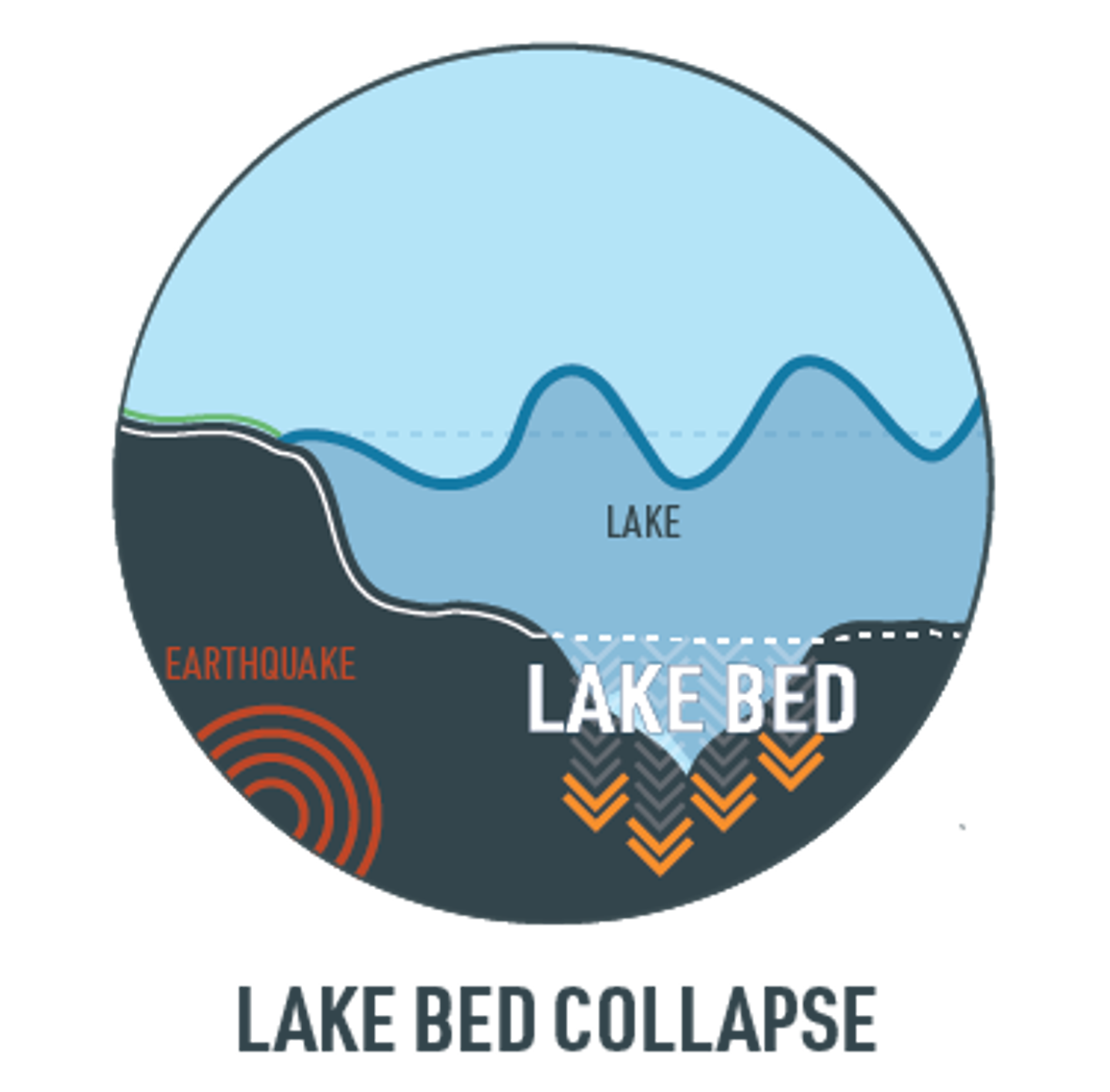 The earthquake causes movement in the lake bed, which displaces the water causing a seiche wave. 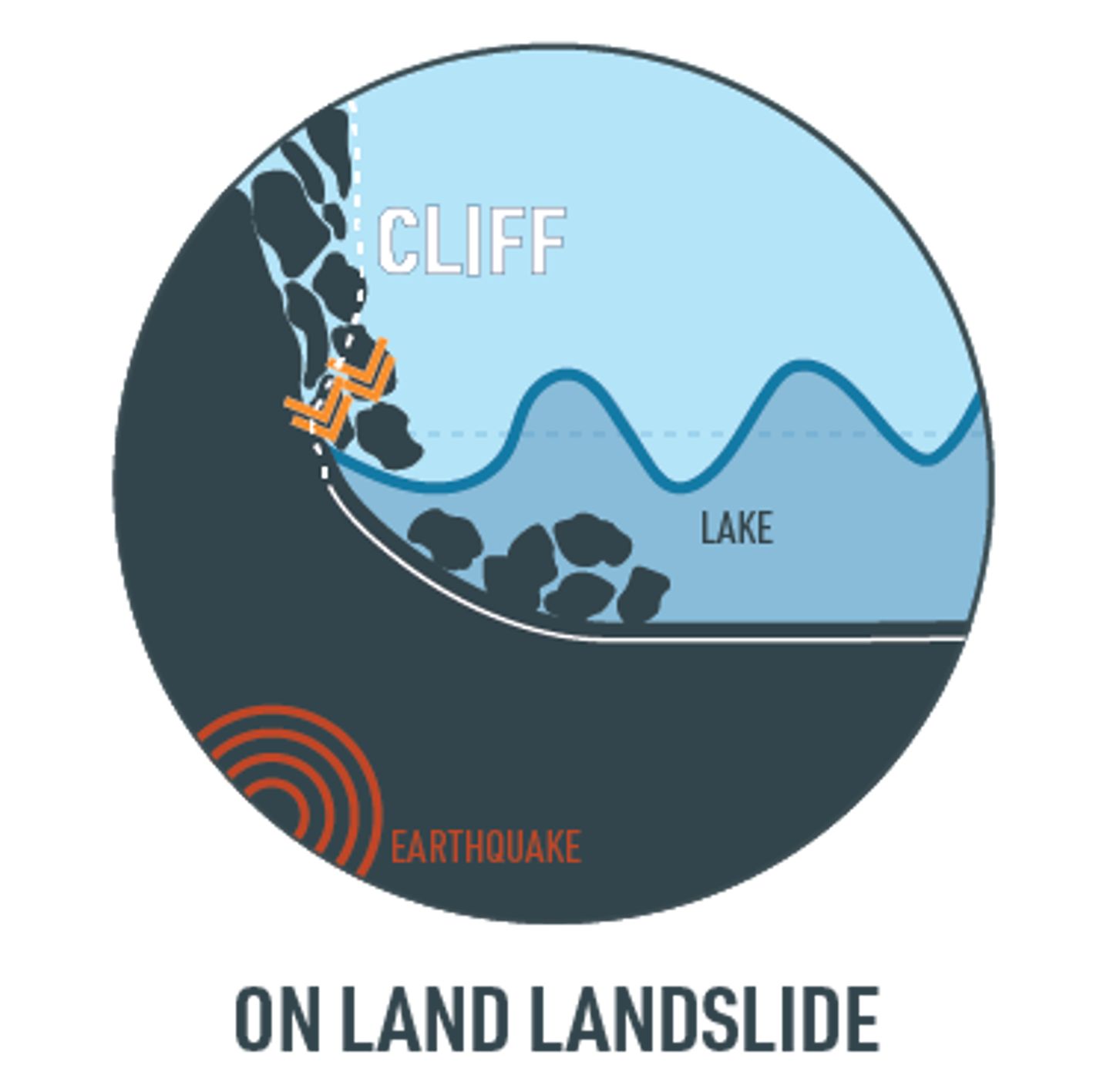 The earthquake causes a landslide at the lake edge, plunging debris into the lake, displacing water and causing a seiche wave. 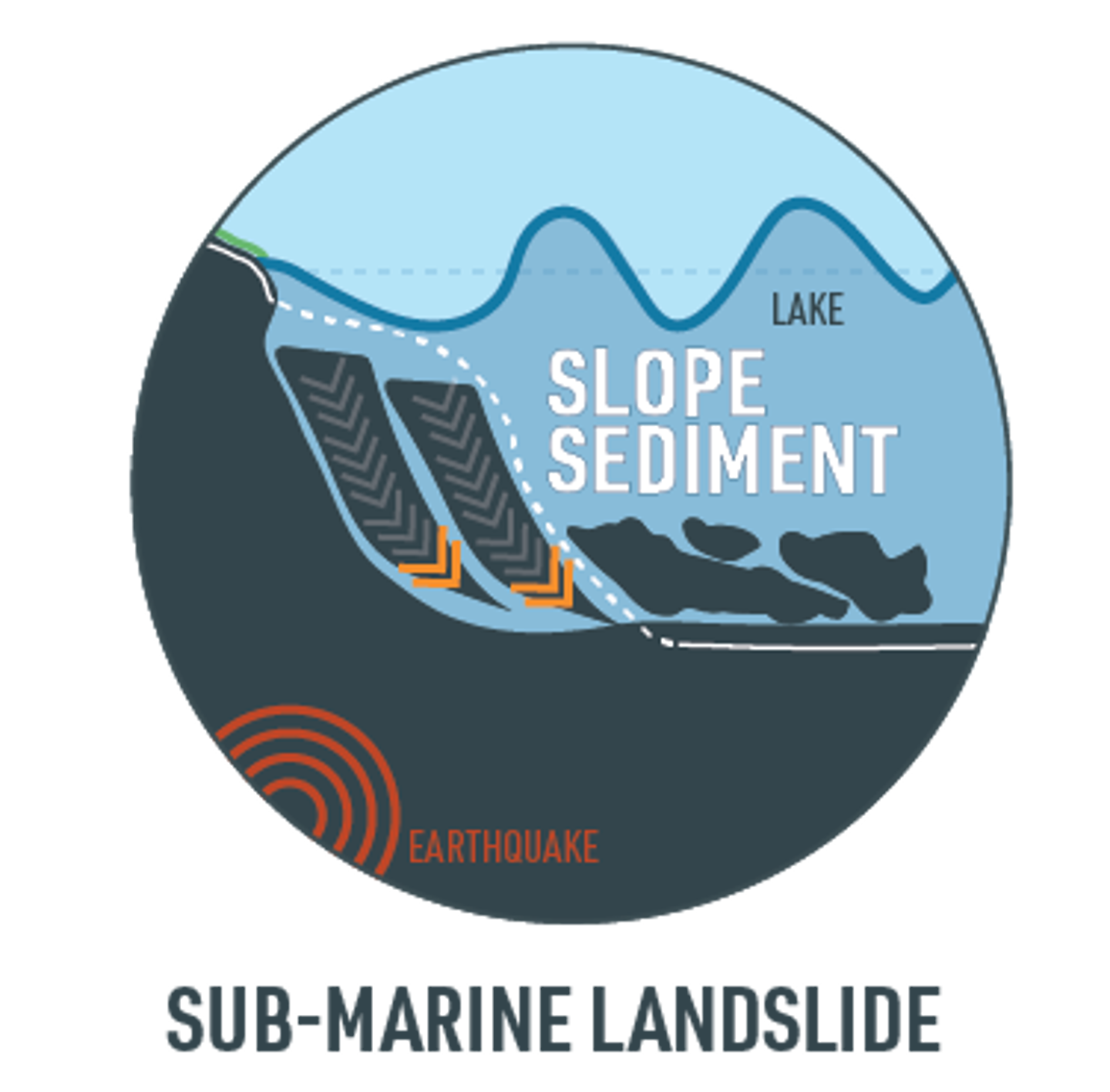 The earthquake causes a landslide below the surface of the lake, which displaces the water causing a seiche wave.

In 2015/2016 a series of work was undertaken to explore the risks of landslides from above and below the surface of the lakes, and the potential for these to cause tsunami. I spoke to Helen Jack, a Geological Hazard Analyst with Environment Canterbury, and she explained the factors that were considered when assessing a landscape for possible risks.

"They looked at a whole load of factors, including how close the landslide was to the lake itself, the volume of rock that might be involved in a landslide, the water depth below where the landslide was – the deeper the water, the more might be displaced in the event of a landslide falling in to the lake. They also looked for any evidence of recent movement – are there cracks in the ground surrounding the landslides, do they look like they could move?” – Helen Jack

The very nature of the geology of this area means that it is prone to landslide. Thousands of years ago, when glaciers covered the area they deposited layers of ‘moraine’ – relatively loose debris, which would be unstable in the event of an earthquake. Successive glacial periods resulted in successive layers of material being laid down, becoming more and more unstable. 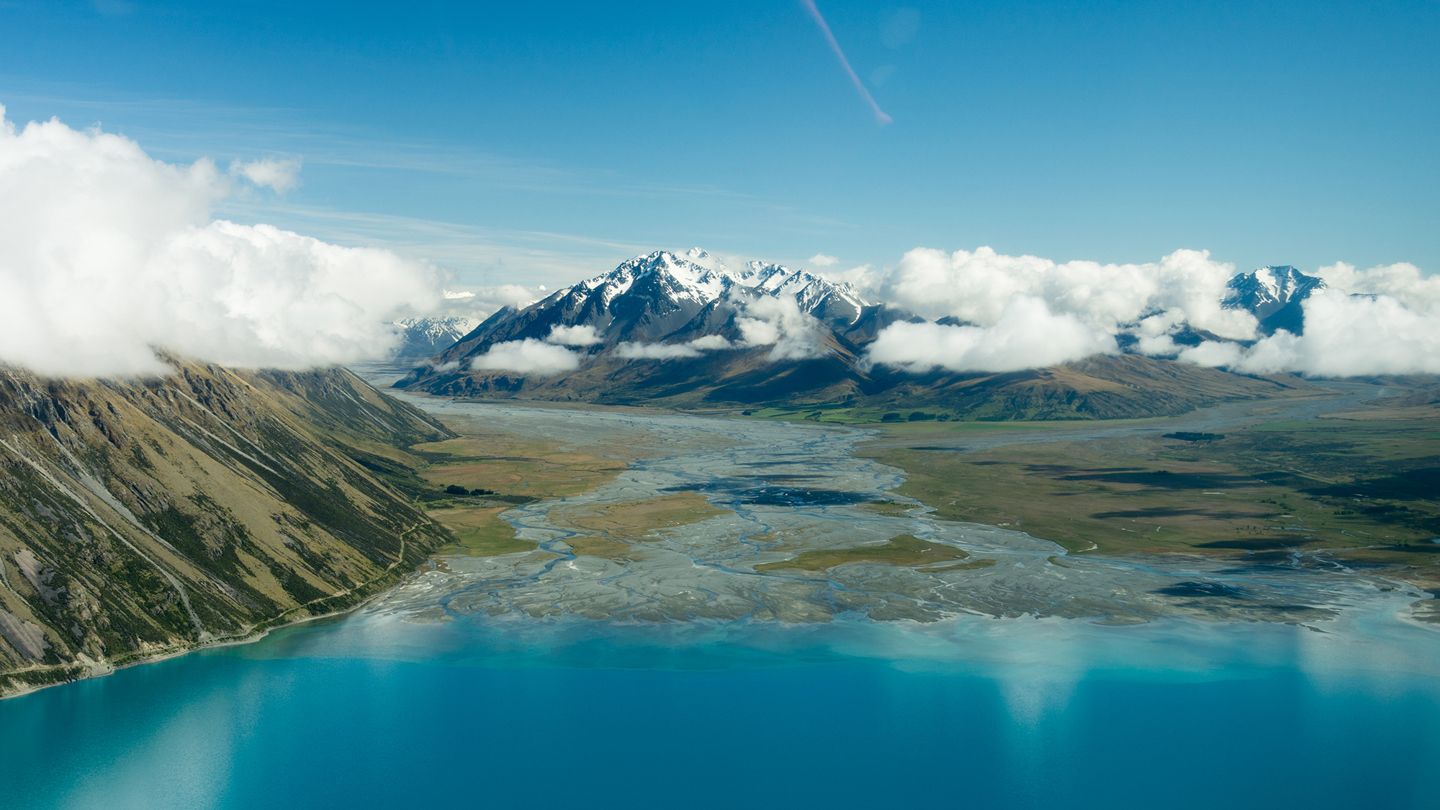 I can see each of the areas that were identified as potentially hazardous in the reports from my bedroom window. Helen explained that, luckily, the chance of them resulting in a significant landslide is relatively small.

So far, though, we’ve only considered the landslides that might originate above the lake’s surface.

You can find Environment Canterbury’s seiche and tsunami scoping study and landslide tsunami investigation report at link below.

Dr. Joshu Mountjoy, a Marine Geologist with NIWA was involved in exploring the bed of Lake Tekapō, to search for signs of instability down there. He described for me how he looked underneath the water.

"To look at a lake bed we use boats, with instruments either mounted on or towed behind. We send down beams of acoustic signals. If we use a high frequency noise, this will reflect off the lake bed, and by timing how long it takes to return to the boat we can figure out the depth of the lake. Lower frequency noises will penetrate through sediment and perhaps even rock, allowing us to build up a picture of the layers of sediment that has accumulated in the lake. We also take sediment cores to establish the ages of the layers.” – Dr. Joshu Mountjoy

In order to determine if there has been a landslide in the past, they look for signs of loose rubble that has flowed down over the lake bed. There will usually be a corresponding scar in the nearby lake shore or mountain-side, indicating that the material has slid down from there. Using the soil cores, they can also determine if any sediment layers correspond in age with our record of past earthquakes. If they are the same age, it can be inferred that the historic earthquake may have caused that landslide.

It’s so interesting to hear of the science that goes in to gaining a better understanding of our local lakes. But once we’ve observed, measured and analysed as much as we can, how does that translate into the information that we need to ensure we can prepare for a possible event? How does that knowledge come together to give us an idea of what to expect and how we might be impacted by a lake tsunami? This is what I still need to find out.